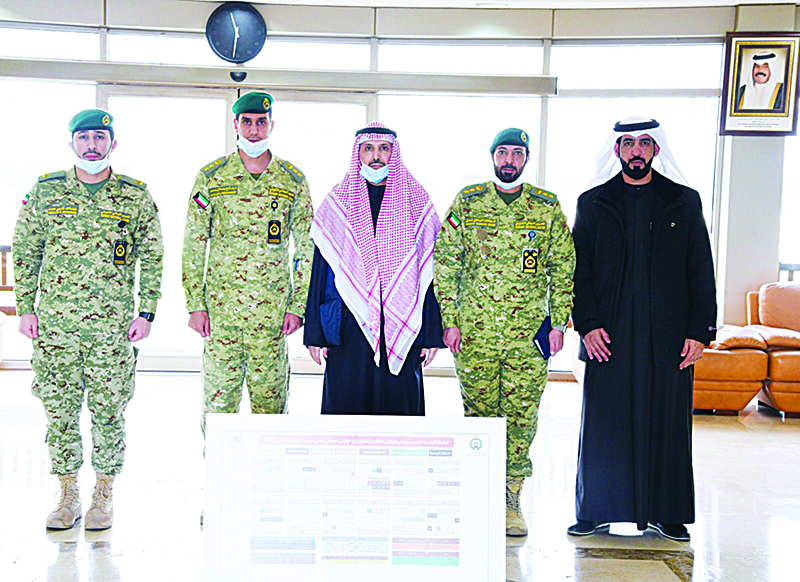 KUWAIT: Secretary General of Kuwait and Arab Shooting Federations Obaid Munahi Al-Osaimi commended the activation of the time schedule of the joint cooperation protocol between the National Guard and Kuwait Shooting Sport Club which was signed on January 11, 2011. This was the result of the support of HH the Crown Prince Sheikh Mishal Al-Ahmad Al-Jaber Al-Sabah when he was Deputy Chief of the National Guard. He ordered the signing of a cooperation protocol between the Shooting Club and National Guard to train National Guard men on the Olympic shooting sports including pistol, rifle, shotgun and archery at Sheikh Sabah Al-Ahmad Olympic Shooting Complex.

Al-Osaimi conveyed greetings to the National Guard leadership during his reception of head of the sports branch Colonel Dr Saleh Jamaan Mohammad, Colonel Nawaf Kharsan Ghosn and Major Abdallah Fares Mohammad in the presence of KSSC Deputy General Technical Director for Pistol and Rifle Abdallah Abdeaziz Al-Barakat. He said the cooperation protocol contributed to discovery of several shooting champions who made several international achievements in the name of Kuwait.

Colonel Dr Saleh Jamaan Mohammad thanked the officials of KSSC for their interest in signing the time schedule plan to activate the protocol’s items. He also lauded the role of the shooting club in providing all that necessary to train and develop the technical levels of the National Guard members.

Djokovic admits ‘errors’ as he fights to avoid deportation