‘Abu Foutah’ (the one with a towel) is the local name of a type of domestic pigeon. I personally do not know why people use such a name because I have never seen any of these pigeons flying with a towel it used to dry sweat or wear it around its neck as a scarf. However, like many others, I do know the ‘expert with the towel’.

In the comic play named ‘Ala Haman Ya Fer’oun’ we saw an example of such an expert and ever since, the ‘expert’ title has become common and we now have hundreds of them in finance, politics and law. Everybody demands to be introduced as an ‘expert’ nowadays while they do not even deserve such a title. After all, they are not titles used with pigeons, you know!

We only had one very well-known expert in combating drugs who had been internationally acknowledged by the UN and the Arab League. He is Dr Ayed Ali Al-Humaidan, who earned the title after conducting an endless number of studies on drugs. The funny thing is that there is a strange link between the international expert Dr Humaidan and the expert with the towel. We recently learnt that the latter asked for a towel to use in drying his sweat after checking some account books. So, I advise Humaidan to ask for one, as well, to dry the sweat he wasted in making studies that nobody ever benefited from.

We are now more like chicken and fish. Whenever a chicken lays one single egg, it tells the world with its crowing, while a fish lays millions of eggs without hearing a single sound from it. Some people purchase a degree and the ‘Dr’ prefix from musical instrument stores without even knowing the difference between the musical scale and other scales. – Translated by Kuwait Times from Al-Anbaa 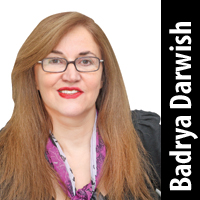 And the chaos continues…