Saudi students will be relocated to other countries

OTTAWA: Naseem waited three years to be accepted to a Canadian postgraduate program. With two years left before she would receive her PhD, the Saudi student’s plans have been upended thanks to a diplomatic spat. The kingdom this week suspended all scholarships to Canada as part of a rupture between the two countries over Ottawa’s criticism of Riyadh’s human rights record. Saudi students will be relocated to other countries.

For Naseem, that could mean she and her husband, who is studying to be a medical doctor, may never earn their degrees. And she feels totally lost, having left Saudi Arabia just after her father passed away in 2017 to pursue her academic dream, 6,500 miles (10,500 kilometers) away from home. “Everything is gone,” said the mother of two, who lives in Toronto but spoke to AFP during a family visit to Riyadh. “I still have two years to get a PhD, and my husband needs two years to graduate as a doctor. We had the perfect plan. Now we might have to start from zero, but I cannot do it. I just can’t,” she said.
For Samira, the complications are similar. She and her husband were married in Jeddah on Tuesday, a day after the Saudi measure was announced. They’d planned to live in Canada until he completes his studies, but at the wedding she felt “broken, disappointed,” she said. “I am about to quit my life to go live with my husband in Canada, where he owns a house. Now, I don’t know where we will go. All our plans were smashed with one decision, and we weren’t even married yet.”

According to Canadian government figures, there were 192,000 international students from 200 countries enrolled in Canadian universities and colleges last year. Saudi students, who currently number about 8,000, are among the largest group. For universities, the loss of fees from the students, who pay from Can$30,000 to Can$80,000 annually for tuition and living expenses, will hurt.
International students contributed Can$15.5 billion (US$12.0 billion) to the Canadian economy last year, including tuition, textbooks, housing and other expenses. “That’s more than the auto parts and lumber industries in Canada,” said Pari Johnston of Universities Canada, an association which represents 96 universities.

In Ontario, where one in five of all Saudi students are enrolled, the recall could cost “tens of millions of dollars,” according to the Council of Ontario Universities. “Attracting international students is an essential part of a broad economic development plan for Ontario since Ontario’s ability to draw top talent from around the world in turn helps attract global investment and business,” a spokesperson for the council said.

Students face far greater difficulties as they seek transfers, less than a month before the start of classes. “This is a major disruption for them. They may lose a semester or a whole year of studies,” said Johnston. It is not easy to just relocate people who have been living in Canada for years. “It’s just not easy. I don’t know what to do,” Naseem said. “Now we have to find a place where we are both accepted, and where we can pursue our studies. Is it possible?! I don’t think so,” she said. “We’re still trying to sort out the situation,” the University of Ottawa’s Veronique Vallee told AFP. “Our main concern is the wellbeing of the students.”

The school has 246 Saudi students, the majority of whom are enrolled in medicine, science or engineering programs. In Western Canada, 150 Saudi students at the University of Regina in Saskatchewan were told they have a month to leave the country. “I have been doing this job for almost 20 years, I have worked in several schools in Canada, this is the first time I’ve seen something of this nature,” Livia Castellanos, the school’s chief international officer, told public broadcaster CBC.

Medical students will be especially hit hard by the chaos unfolding, with about 800 Saudis being trained by Canada to become doctors. “Many medical trainees are in the middle of their residencies and any disruption would delay completion of their training,” said Genevieve Moineau of the Association of Faculties of Medicine of Canada.

She noted that a medical degree typically takes three to four years to complete and is followed by an additional two to seven years of “residency training.” According to the Royal College of Physicians and Surgeons of Canada, up to 25,000 patients could also be affected by the loss of Saudi medical residents. “This could impact healthcare in Canada,” Johnston said. “Residents provide care to Canadians every day as part of their training. The Saudis represent one third of care teams at teaching hospitals.” — AFP 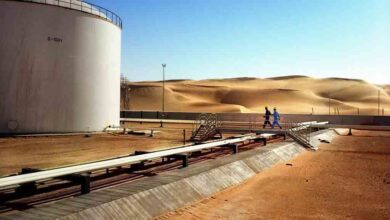 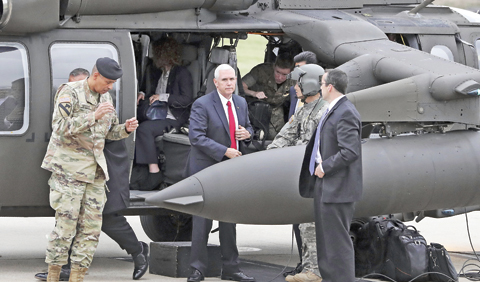 ‘Era of strategic patience is over,’ N Korea warned 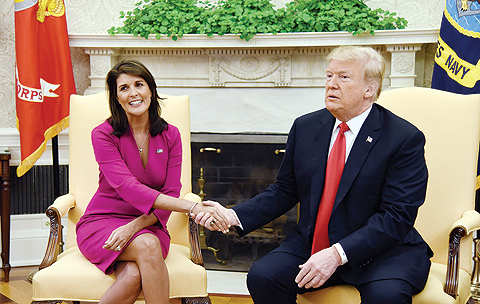 Haley resigns as UN envoy; probe urged on her travel