Dior’s forest fantasy
Fairytale music conjured up a sensuous, magical atmosphere at Chiuri’s spring-summer show that didn’t fully translate to the couture. Taking over the creative reins of such a historic house as Dior is a daunting task, and so who can blame the talented Italian-born designer for playing it a little safe? The finely executed styles – floppy hoods, smooth signature peplums, feather tiaras, delicate sheer black animal masks and butterfly chokers – were pared down on sometimes minimalist silhouettes.
The tulle and silk velvet gowns strongly evoked a fairytale or black-magic theme echoed by the forest decor and “Thought Tree” glistening with Tarot cards and gold coins. The binary palette – of mainly white and black, with flashes of satin red and forest green – highlighted a fairytale morality of good and bad, producing some of the show’s most beautiful looks. Full, floor-length skirts hid the elfin-like models’ legs, so that they appeared to float across the mossy runway floor.

Dunst speaks on women’s movement
Dunst, whose latest film “Hidden Figures” features the untold story of three African-American women working at a racially discriminatory NASA in the 1960s, said there was no better time for the movie to come out. The 34-year-old actress said that the “inspiring message is hugely important in the world today” as it crossed lines of both gender and race at a moment of political transition in the US. “With the (President Donald Trump’s) inauguration, it couldn’t be a better time for this movie to come out. I’m so proud of its success,” Dunst told The AP. “This film inspires women to come out and support other women in the arts and all women everywhere. It shows a movie’s real power to shape attitudes,” she said.

Schiaparelli goes Chinese
Popstar Kylie Minogue and actress Thandie Newton were front row for Schiaparelli’s couture feast – held in the old Place Vendome atelier-apartment of fashion icon Elsa, who died in 1973. Once the place where writer Jean Cocteau and artist Salvador Dali mingled, on Monday fashion insiders were presented a spring-summer show that revisited the design house’s shocking pink as well as art deco and 1930s designs. The show channeled the Asian styles that the eccentric couturier would wear around the famed apartment – including silk Japanese kimonos and Chinese hanfus.
The signature “lobster dress” – influenced by Surrealist Dali – was revisited with inserts alongside menswear jacket silhouettes that riffed on geometry. The house, which was revamped a few years ago, still has some way to go before the designs gain confidence and liberate themselves from the overly referential.

Iris Van Herpen
Blurring the lines between fashion and art, Dutch Wunderkind Iris Van Herpen’s cerebral couture collection explored imperfections and “gaps” in fashion and in science. The catwalk of short-circuiting lines of electricity was lit patchily so that the eyes of the spectator had to keep readjusting to focus in on the 16 organic, diaphanous creations.
It had fashion insiders initially looking bemused as they tried in vain to take photos of the show. But they soon realized this was art. The haphazard lighting was, in fact, the work of German artist Ester Stocker to create visual distortion – to create “a conflict of light and shadow,” so said the house. The theme of imperfection was handled perfectly in the couture, which played on textures in black and white.

High-tech material formed bumps and glistened as if wet on flat-fronted mini dresses that evoked gossamer and weightlessness. Elsewhere, fragmented patterns resemble the grooves of a fossilized shell. Copper-plated diagonal high heels also disrupted the balance of the shoe, leaving a rectangular gap for the very thought-provoking show.

Ralph & Russo
Rapper Nelly and Dunst hit the eclectic Ralph & Russo couture show that revamped the bygone glamour days of the 1950s. Silken full skirts in white and pastel shades successfully sparkled down the runway worn on models with sharp, Asian-style bobs. But the 55 styles felt incongruous as a whole.

Uber-minis of the 1960s sexual revolution met with designs that showcased the clubbing visor and exposed midriff of the 1990s. Elsewhere, one structured pink satin gown embodied 1980s decadence and almost evoked the TV show “Dynasty.” Still, there were plenty of red-carpet gowns to satisfy the nascent house’s burgeoning clientele that includes Beyonce and Gwyneth Paltrow.-AP 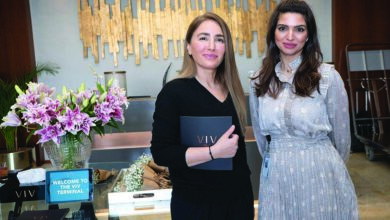 In Iraq’s Kurdish capital, all’s fair in love and walls 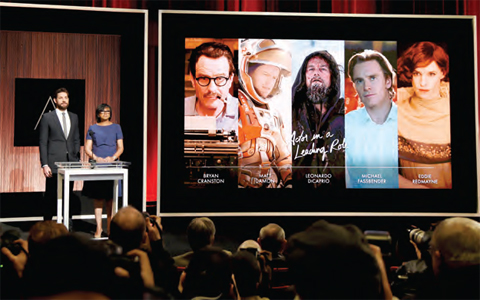 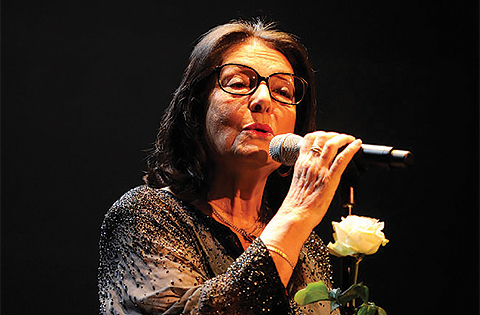