Petition against election panel rejected – Opposition vows comeback
KUWAIT: The government is planning to impose taxes on expats’ remittances and companies, and privatize healthcare and education. According to informed government sources, a special ministerial committee has already prepared a package of economic and financial reform legislations to be presented by the new Cabinet and referred to the new parliament in mid-December.

The sources explained that the government aims to start executing its economic reform plan early and that it expects fierce confrontation in this regard with the new parliament. But it insists on pushing ahead with economic reform as the most important topic on the government’s agenda, along with security and the GCC security pact.

The sources stressed that the government believes that privatizing education and healthcare is a must, while the opposition considers this as unconstitutional. The sources also emphasized that the health sector’s privatization is inevitable and that hospital management would be offered to international specialized companies, starting with Jaber Hospital. The sources added that school privatization would experimentally start with one school per educational area.

Moreover, the sources said the government will also propose cancelling the current form of subsidies and direct them only to those with limited income. “The agenda also includes imposing a 10 percent tax on companies and a 5 percent tax on expats’ money transfers,” the sources concluded.

Separately, the administrative court yesterday rejected a petition claiming that the formation of the election committee was illegal and urged the court to abolish it. The petition was filed by lawyer Hani Hussein and former MP Abdulhameed Dashti, both of whom were disqualified by the election committee along with 45 other candidates. The ruling means that the committee, formed by the interior minister of judges, is legal and its decisions of barring and accepting election candidates are in line with the law.

Hussein however said that this ruling is not the “big surprise” verdict that could delay the Assembly elections. Hussein reiterated on his Twitter account that yesterday’s ruling is not related with the other case that will be heard on Sunday, but he declined to reveal the nature of that case. The election committee’s decisions to bar Hussein and Dashti have been upheld by the administrative and appeals courts and are widely expected to be supported by the court of cassation, whose rulings are final. Dashti’s registration had been rejected by another court because he failed to submit his nomination papers in person because he has been outside the country for the past several months claiming he was undergoing medical treatment.

In another development, leading opposition figures contesting the election yesterday urged voters not to vote to any member of the dissolved Assembly, because they completely surrendered to the government against the interests of the Kuwaiti people. “We hope that the reformist MPs will be the majority in the next Assembly… The Kuwaiti people will emerge victorious in the election,” former Islamist opposition MP Bader Al-Dahoum said at the election rally of Islamist candidate and former MP Jamaan Al-Harbash.

Speaking at the same rally, former opposition MP Shuaib Al-Muwaizri said the country is facing a very dangerous period. “It is a choice between living in a state of masters and slaves or in the state of the rule of law,” Muwaizri said. Harbash said Nov 26 is a day of rage against what the government and former Assembly members did against the opposition. “We are in a bottleneck. I tell them the response is coming and the Kuwaiti people will send you a clear message,” he said.

“The former ‘bogus’ MPs will fail. We will change the face of the Assembly and will reclaim the Assembly chamber,” Harbash vowed amid wild applause from the huge crowd. The former lawmaker did not rule out the possibility of the new Assembly getting dissolved, but he insisted this will not change the opposition’s resolve. He said that since 2006, it has been one election after another.

“They want you to get frustrated from the election process, but we will not be,” he said. “Today, we are fighting against the funds they are pumping (in the election). Do not vote for any member of the previous Assembly. We have accepted the challenge and on November 26, they will hear the response of the Kuwaiti people,” Harbash insisted.
Both Harbash and Dahoum said they will vote for Muwaizri as the next speaker if they get elected.  Muwaizri, in addition to former MPs Abdullah Al-Roumi and Ahmad Al-Mulaifi, have said they will contest the speaker’s post against outgoing speaker Marzouq Al-Ghanem, triggering a key battle in the next Assembly.

Killer turns himself in 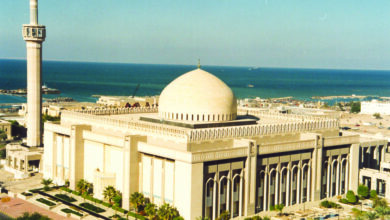 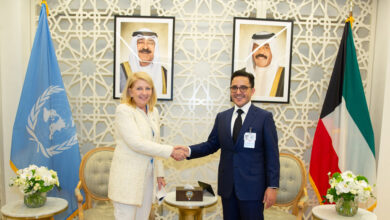