The National Assembly started its new term with the same old tune. Immediately after HH the Amir concluded the opening ceremony with his words of wisdom, several members of parliament started sharpening their knives while eyeing State Minister for Cabinet Affairs and acting Information Minister Sheikh Mohammad Al-Abdullah Al-Sabah. These lawmakers accused the minister of several violations in both ministries and filed a no-confidence motion against him. The minister was also accused of favoring expatriates over Kuwaitis when appointing staff at several state departments, and his financial integrity was questioned.

It is the constitutional right of MPs to question the performance of any Cabinet minister. However, the intention behind such motions should have the betterment of the country at heart and not a personal agenda against the government. I say the same old tune because it has become evident that many grilling motions in the recent political history of Kuwait are driven by personal agendas – as pressure or to seek revenge for anything other than the benefit of the country.

On this occasion one MP supported the grilling and had the audacity to blatantly admit he’s doing it to take a hit at the government for not reinstating the nationalities of those who lost their citizenships in a recent disputed nationality scandal. If this is the reason, then file a different motion altogether against the concerned ministries on this issue and not just support any allegation over peer pressure.

As for the question of favoring expats – I’m sorry: Since when did appointing expats become a crime? This recent wave of anti-expat sentiment is deeply disturbing and is being used as a scapegoat for the shortcomings of lawmakers to deal with the serious problems facing Kuwait – like visa traders with their paper companies that have a ridiculous amount of work permits, the traffic issues caused by flawed road planning and extremely rude drivers that add to the misery of the road conditions and many more issues, but that is a story by itself.

When it comes to the people the minister hired, I am sure he had a number of candidates – both expats and Kuwaitis – then picked from both groups those who deserved the job based on merit. I am sure the accusing MPs have also hired workers in their own private companies for the very same reason.

I can safely say the parliament should concentrate on projects that increase Kuwaiti manpower rather than prosecuting expats for working in Kuwait. Trust me – as a business owner, I can safely say I prefer to hire local. But more often than not, we struggle to keep qualified Kuwaiti staff for any length of time and to meet their salary expectations.

Sheikh Mohammad Al-Abdullah Al-Sabah comes from a highly-respected branch of the royal family and the accusations towards his financial integrity – to my knowledge of him – is clearly a publicity stunt and an attempt to ruin his reputation the same way several ex-MPs accused Sheikh Nasser Al-Mohammad Al-Sabah of the same issue with fake evidence and fake videos, which took the country on a time-wasting merrygo- round. These accusations came from an MP who was also part of those who falsely accused the ex-prime minister, so I would be extremely skeptical of his intentions and allegations.

Sheikh Mohammed Al-Abdullah Al-Sabah publicly stated that he is ready to take the stand, and for those of us who know him well, we expect nothing less from him. Stand by your morals, defend your legacy and carry on your good work.

Govt heading to resign, will skip next Assembly session 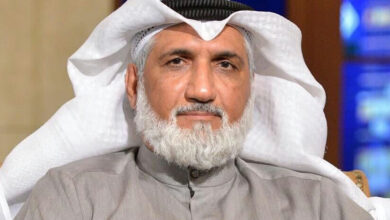 From corona to Eurasia: Ukraine is just a station in the Middle!

Why are you still against vaccine?