Homemade missiles fizzed, roared and sputtered across a field in central Thailand on Sunday as amateur rocketeers put their skills to the test in front of hundreds of revelers. The “Look Noo” festival originated among Thailand’s Mon ethnic group as a way to honor deceased monks in the Buddhist kingdom-using a rocket as a spectacular way to ignite a cremation fire from afar. It gradually developed into a competition, with hundreds gathering every year trying to hit a target around a hundred meters away-or at least send their projectiles flying further than their rivals.

Sunday saw the resumption of the annual festival-paused since 2019 because of the pandemic-spurred social distancing restrictions in Thailand-with around 1,000 spectators amassing in Pathum Thani to cheer on over two dozen teams. The rockets deployed are around a meter long, made from metal and wood and filled with homemade explosives, usually potassium-based. Their horizontal flight is guided first by a cable hanging slightly above head-height, along which they stutter and fizz, gradually picking up speed and belching yellow-white smoke. 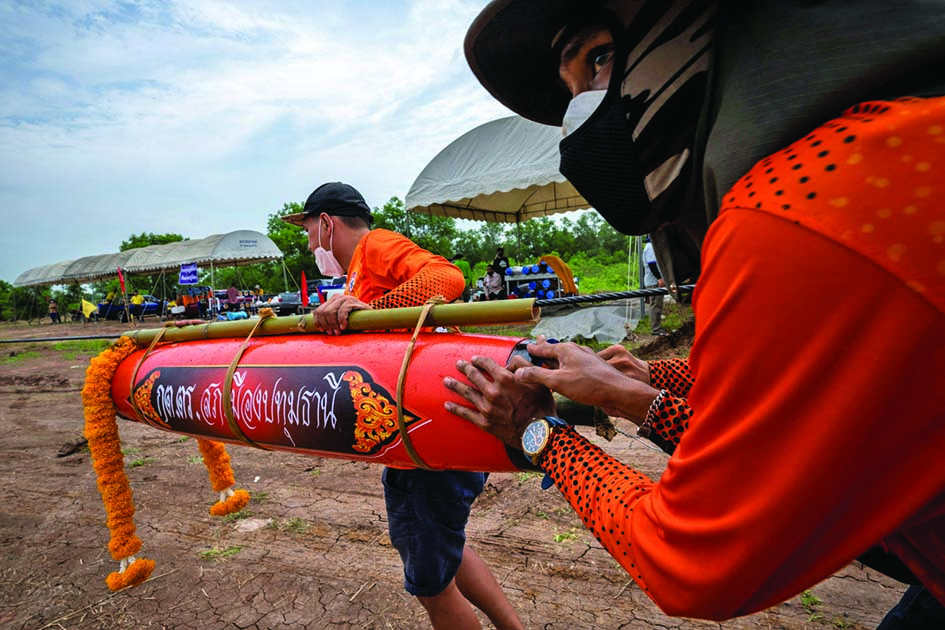 At the end of the cable, the rocket continues zipping through the air-and hopefully towards the target-for a few brief seconds before careening nose over tail across the swampy ground. Helpers rush out with red flags to mark where each rocket landed and judges keep records along the sidelines. After every launch, teams have to recalculate the angle of the cable, said Atthapol Kongkarn, 36.

“We adjust the height each round so the rocket could hit the target,” he said, as his teammates rejigged their rocket’s equipment for its next round. Going for brute power and distance over accuracy can tempt teams into danger, Phra Ajarn Samran Thamavaro Thongbai, the assistant abbot at Bang Pho Nai temple, told AFP “Some teams want their rocket to be the fastest and reach the farthest distance, so they use a highly explosive material… But if they are not careful, the rocket might explode,” he said. “Our rocket also exploded in the past,” he admitted.

A parade of dancing and music accompanies the rockets to the field, and some teams write spells and incantations on the projectiles in the hope of guiding them to their target-as well as a top prize of $440. From the safety of the sidelines, spectator Jongkol Tuusamran, 65, praised the “teamwork” of the amateur gunners. “As Pathum Thani residents, we’re proud of this competition,” she told AFP. – AFP