KUWAIT: Well-informed security sources said Ministry of Interior is following up with concern some demonstrations on the Iraqi side of Khor Abdullah, but noted that the matter was left to diplomats because it was an Iraqi domestic concern.

Smuggling foiled
An Ethiopian woman was arrested on arrival at Kuwait International Airport with possession of eight kilograms of qat hidden in ground coffee in her luggage. Security sources said the suspect denied any knowledge of the drug and claimed that she was only delivering the package.

False alarm
A citizen informed police that he received a call from a landline number that was identified by a smartphone app as ‘Terrorist Organization,’ which terrified him. However, on checking the number, policemen found it belongs to a charity that calls people randomly, asking them to donate.

Traffic dispute
A man and a woman, both Kuwaitis, were arrested for fighting in the street following a traffic dispute, said security sources, noting that the woman used her shoe as a weapon during the fight before passersby called the police.

Restaurant robbed
The manager of a Jahra restaurant reported that an unidentified robber assaulted him and stole one of the restaurant’s delivery vehicles. Security sources said that only half an hour after filing the report, the manager returned to the police station to report that the robber had brought it back. However, the manager insisted on filing a report lest the robber had used the vehicle for any illegal activities.

Assault
A citizen filed a complaint against his two former brothers-in-law (Saudi nationals), accusing them of assault when he went to his ex-wife’s family house to see his children on court orders. The man provided a medical report with injuries he sustained when they allegedly hit him with a rifle butt, breaking his nose, said security sources. However, on summoning the in-laws, they also provided medical reports with injuries they claimed they sustained when the Kuwaiti man allegedly broke into their house. A case was filed and further investigations are in progress.

Forgery
A citizen was arrested for entering the country without registering his entry with the Ministry of Interior’s border systems at Salmi land border post. Security sources said that the man, who works in the exit department, had officially left for a GCC state through the Nuwaiseeb land border exit, and a week later returned through Salmi, where he was warmly received and entertained by his coworkers, then went home without registering his entry. The sources added that a few days later, his supervisor noticed that he had not been registered while entering the country, despite the fact that he was already at work behind the counter.  – Translated from the Arabic press

Visa holders rush to board flights amid reprieve 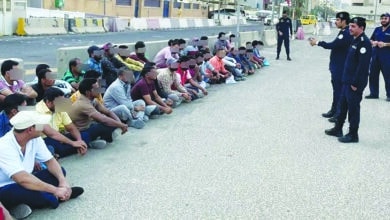 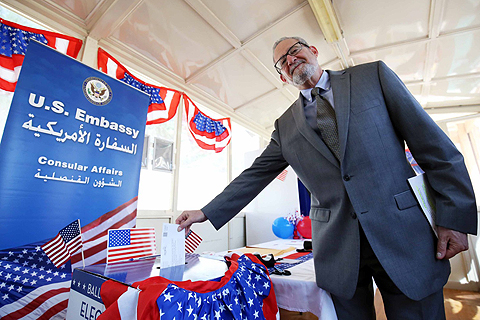 Americans in Kuwait vote for midterms at embassy