BAGHDAD/TEHRAN: Iraq’s parliament called yesterday for US and other foreign military forces to leave amid a growing backlash against the US killing of a top Iranian military commander that has heightened fears of a wider Middle East conflict. In a war of words between Iran and the United States Secretary of State Mike Pompeo said Washington would target any Iranian decision-makers it chose if there were further attacks on US interests by Iranian forces or their proxies.

Qassem Soleimani was killed on Friday in a US drone strike on his convoy at Baghdad airport, an attack that took US-Iranian hostilities into uncharted waters and stoked concern about a major conflagration. As Washington and Tehran, longtime foes, assailed each other with threats and counter-threats, the European Union, Britain and Oman urged them to make diplomatic efforts to defuse the crisis.

The Iraqi parliament passed a resolution calling on the government to work to end all foreign troop presence, reflecting the concern of many in Iraq that the strike could engulf them in a major war between two bigger powers long at odds in Iraq and across the region. “The Iraqi government must work to end the presence of any foreign troops on Iraqi soil and prohibit them from using its land, air space or water for any reason,” it said.

Parliamentary resolutions, unlike laws, are non-binding to the government. But this one is likely to be heeded: Prime Minister Adel Abdul Mahdi, who heads a Shiite-led government, had earlier called on parliament to end foreign troop presence as soon as possible. Iraqi militia leader Abu Mahdi Al-Muhandis was also killed in Friday’s strike. Some 5,000 US troops remain in Iraq, most in an advisory role.

The resolution was passed by overwhelmingly Shiite lawmakers, as the special session was boycotted by most Sunni Muslim and Kurdish lawmakers. One Sunni member of parliament told Reuters that both groups feared that kicking out US-led coalition forces would leave Iraq vulnerable to an insurgency, undermine security and heighten the power of Iranian-backed Shiite militias.

Earlier yesterday, Iran lambasted Donald Trump after the US president threatened to hit 52 Iranian sites hard if Tehran attacks Americans or US assets in retaliation for Soleimani’s death. “Like ISIS, Like Hitler, Like Genghis! They all hate cultures. Trump is a terrorist in a suit. He will learn history very soon that NOBODY can defeat ‘the Great Iranian Nation & Culture’,” Information and Telecommunications Minister Mohammad Javad Azari-Jahromi tweeted.

Soleimani masterminded Iran’s clandestine and military operations abroad as head of the Revolutionary Guards’ Quds Force, creating an arc of Shiite power with the help of proxy militias confronting the regional might of United States and Israel. Supreme Leader Ayatollah Ali Khamenei promised on Friday that Iran would seek harsh revenge for his death.

Hundreds of thousands of mourners, many chanting, beating their chests and wailing in grief, turned out across Iran to show their respects after Soleimani’s body was returned home to a hero’s welcome. “Iran’s wearing black, revenge, revenge,” black-clad mourners chanted in Iran’s second city Mashhad yesterday as darkness fell and they followed a truck carrying Soleimani’s coffin towards the floodlit Imam Reza shrine. The mourners threw scarves onto the roof of the truck so that they could be blessed by the “blood of the martyr”.

Soleimani’s remains had been returned before dawn to the southwestern city of Ahvaz, where the air resonated with Shiite chants and shouts of “Death to America” during a procession. People held aloft portraits of Soleimani, one of the country’s most popular public figures who is seen as a hero of the 1980-88 Iran-Iraq war. The “million-man” turnout in Mashhad, northeastern Iran, forced the cancellation of a night ceremony in Tehran yesterday, said the Islamic Revolutionary Guard Corps who urged citizens instead to attend a memorial today at Tehran University.

In Tehran, deputies chanted “Death to America” for a few minutes during a regular session of parliament. “Trump, this is the voice of the Iranian nation, listen,” said speaker Ali Larijani. Soleimani’s remains and those of five other Iranians – all Guards members – killed in the US drone strike had arrived at Ahvaz airport before dawn, semi-official news agency ISNA said. With them were the remains of Muhandis.

Pompeo rejected suggestions that the intelligence assessment that led to the strike on Soleimani was thin and said there was no doubt Iran had absorbed the message from Washington. “The intelligence assessment made clear that no action – allowing Soleimani to continue his plotting and his planning, his terror campaign – created more risk than taking the action that we took last week,” he said on ABC’s “This Week” show.

Democratic critics of the Republican president have called the strike that Trump authorized reckless, saying it risked more bloodshed in a dangerous region. The top Democrat in the Senate, Chuck Schumer, said on ABC’s “This Week”: “We do not need this president either bumbling or impulsively getting us into a major war.”

US Speaker of the House Nancy Pelosi said in a statement that information given to Congress by Trump “prompts serious and urgent questions about the timing, manner and justification of” the strike. “The Trump Administration’s provocative, escalatory and disproportionate military engagement continues to put service members, diplomats and citizens of America and our allies in danger,” said Pelosi. Another prominent Democrat, Alexandria Ocasio-Cortez, called the president a “monster”, for “threatening to target and kill innocent families, women and children”. In a tweet, she said: “This is a war crime.”

Sayyed Hassan Nasrallah, leader of Lebanon’s powerful, Iran-allied Hezbollah movement, said the US military in the Middle East would pay the price for Soleimani’s death and US soldiers and officers would return home in coffins. “The American army killed them and it will pay the price. The only just punishment is (to target) American military presence in the region: US military bases, US warships, each and every officer and soldier in the region,” Nasrallah said.

He added however that American civilians such as “businessmen, engineers, journalists and doctors” should be spared. “When the coffins of American soldiers and officers… start to return to the United States, (US President Donald) Trump and his administration will realize they have lost the region,” he said.

Nasrallah’s speech was beamed to black-clad supporters who gathered in southern Beirut, waving Hezbollah’s yellow flag or holding up portraits of Soleimani and Muhandis. Nasrallah also called on Iraq to free itself of the American “occupation”. “Our demand, our hope from our brothers in the Iraqi parliament is… to adopt a law that demands American forces withdraw from Iraq,” he said.

In his speech, Nasrallah said he had last seen Soleimani when the Iranian general visited him on New Year’s Day on Wednesday, without specifying where the meeting took place. He said the general had flown out of the Damascus airport on Thursday night to Baghdad, where he was welcomed by Muhandis. Earlier yesterday, Hezbollah news outlet Al-Manar published undated photos of Nasrallah and Soleimani, including one in which the Iranian commander kisses Nasrallah’s forehead.

Trump tweeted on Saturday that Iran “is talking very boldly about targeting certain USA assets”. He said the United States has “targeted 52 Iranian sites”, some “at a very high level & important to Iran & the Iranian culture, and those targets, and Iran itself, WILL BE HIT VERY FAST AND VERY HARD”.

In remarks to Fox News yesterday, Pompeo said Trump had not threatened to target Iranian cultural sites. Iran summoned the Swiss envoy representing US interests in Tehran yesterday to protest at “Trump’s hostile remarks”, according to Iranian state television. EU foreign policy chief Josep Borrell urged Iran’s foreign minister by phone to work to de-escalate the situation and invited him to Brussels to discuss ways of preserving world powers’ 2015 nuclear deal with Iran.

It was Trump’s withdrawal of the United States from the deal in 2018 and reimposition of sanctions on Iran that touched off a new spiral of tensions after a brief thaw following the accord. Iran was to decide yesterday about its next step to further roll back its commitments to the nuclear containment deal, Foreign Ministry spokesman Abbas Mousavi was quoted as saying. “Considering the recent threats (by America) it should be underlined that in politics, all developments and threats are linked to each other,” state news agency IRNA quoted him as saying. – Agencies 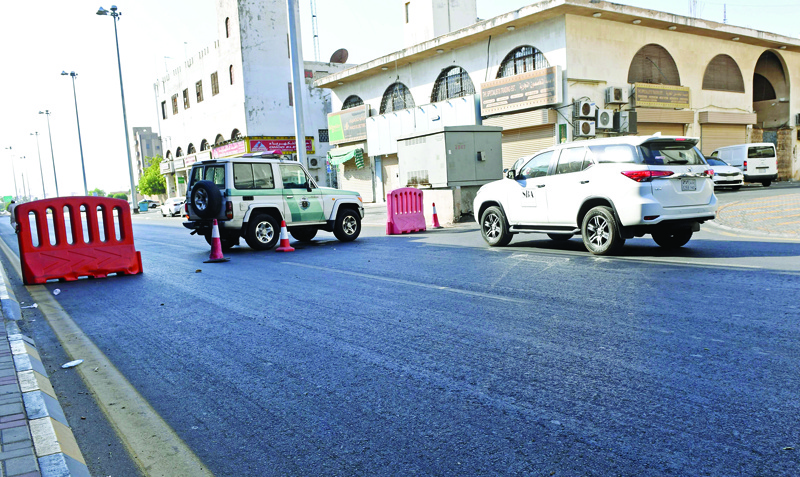 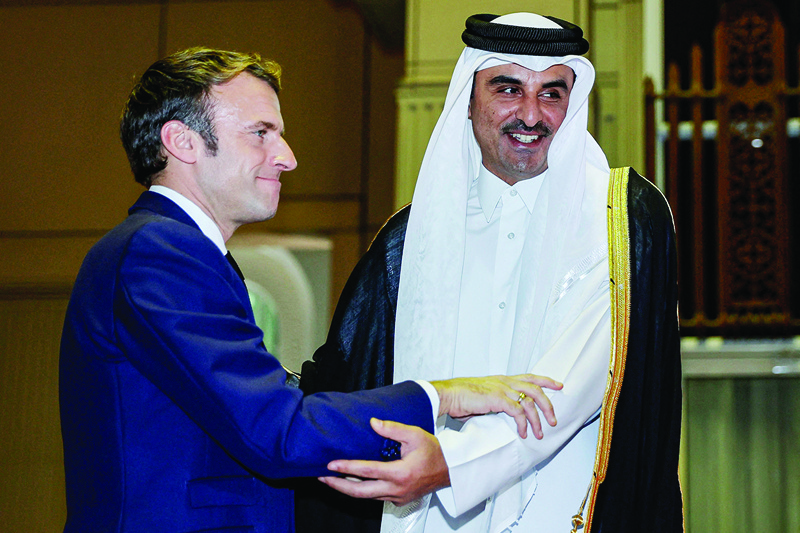 Macron thanks Qatar for Afghan evacuations 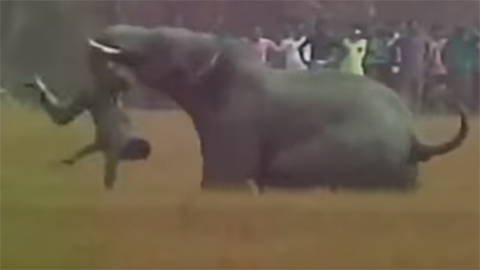 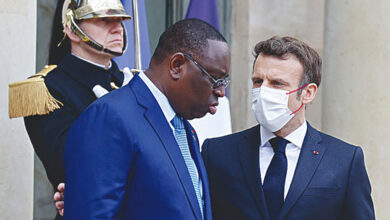