Despite the progress in science and technology and the increasing number of educated women in the world, some women continue to fall victim to militant groups and pay the price of an unknown future and the children they give birth to as wives of terrorists. This issue must now be tackled by governments around the world with the fall of IS.

The military defeat of IS over the past few months in Syria and Iraq has led to unexpected problems that require a national strategy, regarding the women who were in that group, and their children too. Women and children of IS supporters were either displaced or captured, and are being held in detention in makeshift camps in northern Syria. They were detained by US-backed Kurdish fighters during operations around Raqqa and are now waiting to face the consequences of what they committed or were involved in.

When the so-called Islamic State encouraged women to join its newly founded ‘caliphate,’ thousands of women from Europe, North Africa and the Middle East answered the call and moved to IS-controlled territory. “We were looking for paradise, but all we got was hell.” This is a well-known comment by one of the arrested women of IS.

According to media reports, some of the women are Syrian, but not all. Many are from overseas. Some joined IS because they believed in it, while some just followed their husbands and lovers and a few wanted to escape from their parents. The romantic illusion turned into hell and slavery, sex, rape, suicide and torture.

The shift in women’s participation from supportive to military roles and duties took place during the battle of Mosul, when IS was facing extreme pressures that became clearer with its defeat. In 2015, the Al-Khansa Brigade of women was established in the de facto IS capital Raqqa in Syria, which released a document on the roles of women in the group. They were sent to the frontlines in Syria, with reports of IS training female suicide bombers. When IS faced extreme pressure from Iraqi troops and its allies, a series of suicide attacks were conducted by women. The role of women in IS should be a reminder to policymakers working on the issue of women involved in violent extremism.

A German girl is facing trial and possibly the death penalty in Iraq for joining IS. She was persuaded to run away from Germany to join IS by a Jordanian girl, whom she spoke with online. She introduced her to a militant, so she fled to the hell of IS by her own choice. Now she is being held in Baghdad awaiting trial. The 16-year-old claimed she lived only as a ‘housemaid’ and did not take part in combat. This is something that needs to be examined and proved by evidence, because mere regret is not enough.

According to media reports, the girl, who left her home in Pulsnitz in eastern Germany a year ago to join the terror group, is desperate to return to Europe amid fears she could spend years in jail. Iraqi Prime Minister Haider Al-Abadi said Iraq’s judiciary will decide if the teenager will face the death penalty.

Is it fair to only face a trial and maybe be jailed or executed for the crimes all these women supporters did with IS? Do Western governments have a strategy on how will deal with these women when they return back home, and how will they integrate in civil society again? What happens after jail time? There are potentially thousands of such women and there is no clear policy on rehabilitation. We have heard of some studies and ideas, but everything has been left on the Iraqi government’s shoulders to think and decide.

There is a need to set up programs on this issue, and the Iraqi government must be updated with a transparent policy so that they can coordinate the process. Governments must not be allowed to ignore their duties and obligations on this. Human rights organizations must also take part to make teenage girls aware and not get fooled by strangers on the Web and end up dead or in jail. As much as we sympathize with the situation of women who have become victims with their involvement with terror groups, the guilty should not be set free and justice must prevail. 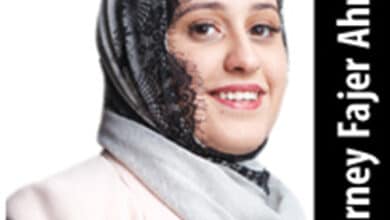 Trump is no surprise