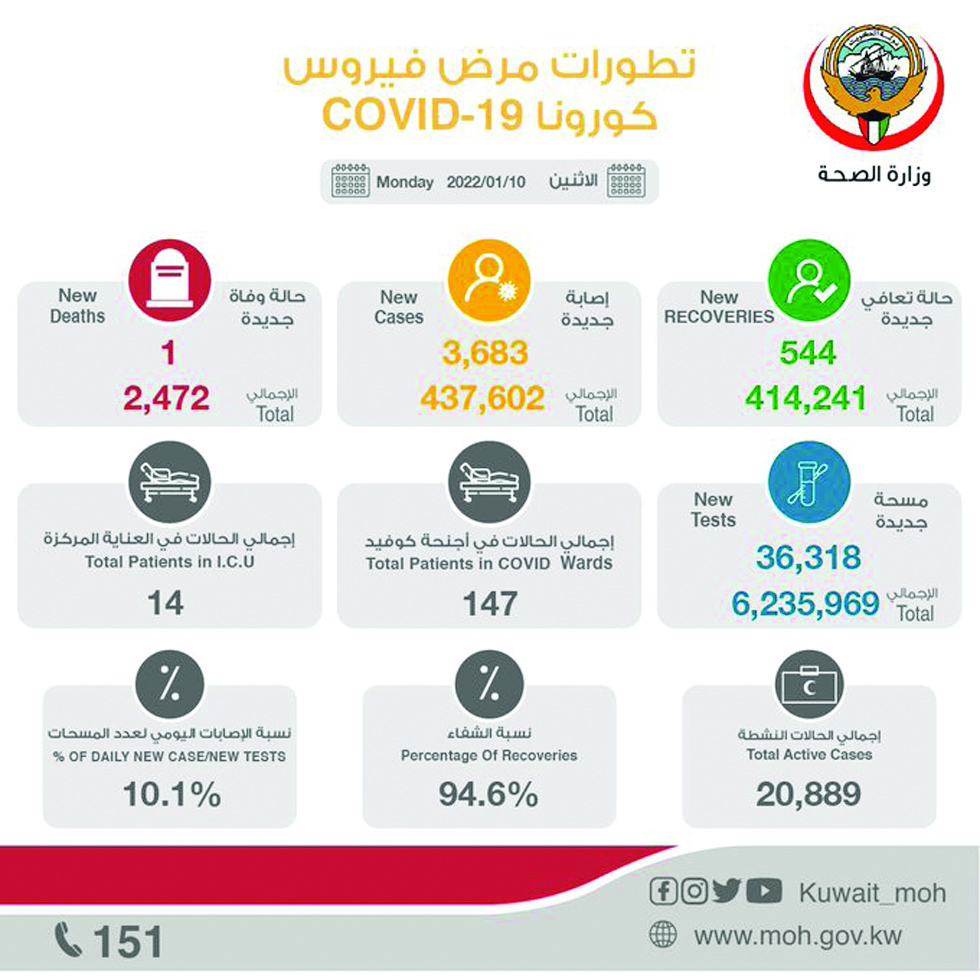 KUWAIT: The Kuwaiti Ministry of Health announced yesterday recording 3,683 new infection cases with the novel coronavirus (COVID-19) in the last 24 hours. The new figure is the highest daily record in Kuwait since the pandemic started, and the first time the country records more than 3,000 new cases in a single day. With the new contamination cases, Kuwait’s caseload climbed to 437,602. Dr Abdullah Al-Sanad, the MoH spokesperson, said in a statement to the press that medical authorities recorded 544 new recovery cases, increasing the overall count of the cured to 414,241, noting that the proportion of the healed as compared to the total number of the cases reached 94.6 percent. Dr Sanad also revealed that there was a single death due to contamination with COVID-19, during the past 24 hours, thus the whole figure of the deaths settled at 2,472.

As to the number of people still receiving medical treatment at intensive care units, he said that there were 14 patients in these wards as of yesterday. The whole count of the cases with confirmed infection that continue to receive treatment has reached 20,889 and the number of people that are treated at the COVID-19 wards has stood at 147. Also in the same duration, medical staff conducted 36,318 PCR tests with the whole number of these examinations soaring to 6,235,969, Dr Sanad said, also noting that the proportion of the infection cases to the tests reached 10.1 percent.

Kuwait along, with other Gulf countries, has been battling the coronavirus and its strains with protective measures and vaccinations. In response to the recent hike in daily infections driven by the Omicron variant, Kuwait’s Cabinet yesterday ordered state departments to slash staff attendance down to 50 percent. Private employers have been told to limit their staff capacity in a manner that would still allow for a smooth workflow, the government’s communication center cited spokesman Tareq Al-Mezrem as saying. In measures to halt the spread of the virus, in effect as of tomorrow, he said conferences and meetings would shift back to video link, while public transport capacity should not exceed 50 percent. Similarly, sporting venues nationwide, in addition to gyms and salons, would only allow entry to those who have been fully vaccinated, added the spokesman.

In the meantime, the Civil Service Commission (CSC) issued a resolution following the Cabinet’s meeting to announce the limiting of staff capacity, as well as shifting to holding conferences and meetings virtually. In a statement, the CSC said the biometric fingerprint attendance system in all state departments will be suspended. —KUNA