KUWAIT: The Kuwaiti Cabinet yesterday praised the Information Minister’s replies to the MPs during the recent parliamentary interpellation session, namely the “irrefutable” information he stated in response to the legislators. The ministers, during their weekly meeting, re-affirmed that the inquiry was marked with “controversial and irregular points,” according to a statement read post the session, also noting that the MPs who grilled the minister deviated from constitutional and legal norms.

They extolled the Minister of Information, Minister of State for Youth Affairs Sheikh Salman Sabah Al-Salem Al-Humoud Al-Sabah for his “convincing responses, irrefutable information and non-controversial facts” he had stated during the inquiry session.  The ministers examined Tuesday’s grilling session, during which Minister Sheikh Salman was quizzed before ten MPs presented a non-confidence motion against him according to article 143 of the parliament by-law, along with “with other repercussions witnessed in latest days.”

The ministers expressed support for Minister Sheikh Salman shortly after National Assembly Speaker voiced identical views on process of the grilling saying it was politically motivated and that the interpellators did not stick to the scheduled inquiry topics.

On January 15, three MPs requested grilling the minister over his purported responsibility for international suspension of national sports, alleged violation of freedom of the press and wrongdoings at the financial and administrative levels. Article 100 of the Kuwaiti Constitution entitles every member of the National Assembly to question the prime minister and cabinet members in regard to matters falling within their jurisdictions.  His Highness Prime Minister Sheikh Jaber Mubarak Al-Hamad Al-Sabah chaired the weekly session, held at Bayan Palace.

Positive visit
Minister of State for Cabinet Affairs Sheikh Mohmmad Abdullah Al-Mubarak Al-Sabah, reading the statement after the session, said the ministers were briefed about current “positive visit” to the country by the Croatian president, noting it would contribute to boosting mutual cooperation between the two friendly countries in various fields.  They were also informed about a message addressed to His Highness the Amir from the UAE President inviting His Highness to partake in the World Governments Summit due in Dubai in end of this month, First Deputy Prime Minister and Foreign Minister Sheikh Sabah Khaled Al-Hamad Al-Sabah addressed the ministers during the session about His Highness the Amir’s participation in the annual camel race, held in Riyadh on February 1, as part of the 31th edition of Al-Janadriyah Cultural Festival.

The ministers examined a recommendation by the economic affairs committee on reports by auditors’ bureaus at the ministries and government departments, affiliate authorities and independent institutions for the fiscal year (2015-2016).  They also studied a brief analytical statement about results of advance auditing of State authorities for first half of the 2016-2016 fiscal year for tackling some of the mentioned remarks.

Terrorist attacks
Meanwhile, the Cabinet condemned a recent attack that targeted a Saudi warship while it was on a patrolling mission west of Al-Hudaydah Yemeni Port. The cabinet said in a statement following its weekly meeting that Kuwait stands side by side with Saudi Arabia in all measures it is taking to maintain its security and stability and to fight these terrorist acts.
Two persons were killed and three others injured on Monday when boats driven by Houthi rebels attacked a Saudi vessel, patrolling off Hudaida Port in Yemen, the coalition supporting legitimacy in Yemen said.

The cabinet also deplored a “terrorist” attack that targeted Louvre Museum in central Paris in which a French soldier was injured. It reiterated Kuwait’s support to precautionary measures being taken by the French government to fend off similar terrorist incidents that aim at disrupting France’s security and stability.

Finally, the Kuwaiti cabinet denounced a recent bombing in Manama as a “terrorist act.” It called on the international community to exert more concerned efforts to fight terrorism that intends to disrupt security and stability and intimidate innocent people. – KUNA 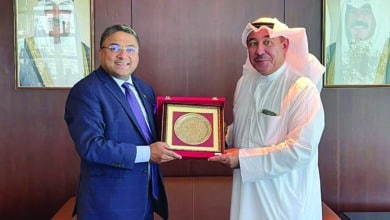