KUWAIT: Kuwait government bodies have been mobilized amidst heavy rainfall in the country Friday evening, fully prepared to help either people stranded, make traffic as smooth as possible to offering medical assistance. Ministry of Social Affairs and Labor said it was opening its halls, originally used for social occasions, to allow people stranded in streets to seek shelter until weather improves. Hanaa Al-Hajri, Assistant Undersecretary for Social Development, said the ministry would be opening halls in areas of Saad Al-Abdullah, Al-Naseem, Jleeb Al-Shuyoukh, Ardhiya, Firdous, Omariya, Farwaniya and Al-Herbesh. She said the other halls were in areas of Khaitan, Jee’an, Qabazard, Salmiya, Sabah Al-Salem, Jaber Al-Ali, Sabahiya, Reqqa, Bader Al-Mohammad, Qurain, Nasser Al-Mohammad, Al-Shallahi, Sabah Al-Jaber, Martyr Fahad Al-Ahmad, Fahad Al-Ahmad, Abdullah Al-Mubarak and Mishref.Ministry of Health said it was activating the emergency plan with full staff on alert. Ministry Undersecretary Dr Mustafa Redha said doctors, nursing staff and paramedics were doing their best to deal with aftermath of heavy rainfall. Director of Ambulance Services at the Minister Jassem Al-Foderi said the ministry received 278 calls for cases mostly about asthma, heart diseases and house calls. He confirmed readiness of emergency departments at all hospitals were ready, and the ministry was in contact with interior ministry, fire department and civil defense to coordinate action.

Kuwait Army and National Guard also announced mobilization to deal with heavy rainfall. The National Guard said it was upgrading readiness to Level Two, which means mobilization of 50 percent of forces. Six National Guard teams were formed to support government departments deal with impacts of rain, like dealing with swamps and secure smooth traffic. The army said forces were at Farwaniya and Adan Hospitals as well as Ahmadi Bridge and Manqaf Area to remove rain water.
Kuwait Municipality also activated emergency plan in all six governorates. It added in a statement teams were ready to help remove rain water in residential areas and major roads, in addition to removing falling trees and large quantities of sand. His Highness the Prime Minister Sheikh Jaber Al-Mubarak Al-Hamad Al-Sabah said the government was following up closely the situation across the country amid the unstable weather conditions and heavy rains. There are direct instructions to all ministries to take necessary measures to maintain safety of citizens and their properties, His Highness the Prime Minister said. Officials who will not fulfill their duties well, will be held accountable, he vowed. In conference call with the concerned ministers, His Highness the Premier affirmed the necessity of making sure that all government bodies are ready to deal with the current weather conditions. Earlier in the day, the Interior Ministry urged motorists to be cautious enough while driving on roads during heavy rains hitting the country. The motorists also are advised to leave an enough space ahead of other vehicles, as well as avoid sudden stops.

Stay indoors
The Ministry of Interior and Kuwait Fire Service Directorate had urged the public to stay indoors, unless it is necessary, due to waterlogged roads in some areas in the country. “We call on citizens and residents to stay indoors unless it is absolutely essential due to some waterlogging in most of the country’s roads,” KFSD’s Director General Lieutenant-General Khaled Al-Mekrad said in a press statement. Firefighting teams are currently on alert to deal with any situation and answer emergency calls via security line (112), Al-Mekrad said. KFSD received more than 170 emergency calls, most of which, over 80, from Ahmadi governorates reported electric short circuit accidents, people stuck inside their vehicles due to waterlogging, and some house basement flooding incidents, he noted, adding his teams dealt with these situations successfully, and that no injuries were reported. Meanwhile, MoI mentioned that security teams, in cooperation with public works ministry, are currently working on the roads that closed due to waterlogging, urging drivers to cooperate with traffic police in order to facilitate traffic, commit to traffic rules, and take all necessary and safety precautions.

Maximum readiness
Kuwait’s National Guard has announced a state of maximum readiness at the administrative support units due to weather conditions engulfing the country. National Guard’s Undersecretary Lieutenant General Hashem Al-Refaie has raised readiness to the maximum level at the administrative support units, the National Guard said in a statement Friday. It added that Al-Refaie took part in a meeting, which included Minister of Health Sheikh Bassel Al-Sabah and ministries’ officials within the framework of activating the emergency plan to tackle impacts of the heavy showers hitting the country. The guard earlier in the day announced the formation of six technical emergencies to follow up the exerted efforts to back the government bodies tasked with tackling the impacts of rains and accumulated water to ensure smooth traffic on roads and face any emergency, in implementation of the 2020 strategic goals’ document.

Oil sector declares emergency
A state of emergency was announced at the Kuwait Petroleum Corporation (KPC) and its subsidiaries on Friday due to the current unstable weather, spokesman for the oil sector Sheikh Talal Al-Khaled Al-Sabah said. He added that the emergency rooms of the oil institutions were activated. Sheikh Talal said all concerned teams are existing at all oil institutions. They are on alert to deal with emergencies caused by heavy showers, he added, stressing that situation is currently stable regarding the production and export process. The KPC and its subsidiaries are keen on the safety of all workers, through a maximum readiness of concerned teams to respond to any emergency, he noted.

Meanwhile, the Kuwait Oil Company (KOC) on Friday declared a state of emergency because of weather conditions engulfing the country. The concerned teams are dealing with all complaints regarding the heavy showers, KOC spokesman and deputy CEO for financial and administrative affairs Ahmad Al-Hamad said in a press statement. Complaints are dealt with in line with the followed measures in the company, he said. “We put into consideration the safety of all company’s staff and all citizens of Al-Ahmadi city,” he affirmed.

Also, the Kuwait National Petroleum Company’s spokesman Bassem Al-Isa said showers did not cause any damage to refineries. He added that the company is operating normally in line with its planned program. Some units sustained limited and ineffective damage, he said, adding that teams are dealing with this matter efficiently. Water leak into Al-Ahmadi refinery’s gate was tackled, he noted, referring that action has not been effected due to the leak.

All resources
Meanwhile, Sheikha Amthal Al-Ahmad Al-Jaber Al-Sabah, Chairperson of the Kuwait Voluntary Work Center (KVWC), announced yesterday placing the center resources at disposal of the concerned authorities to aid citizens due to heavy rain and weather instability. Sheikha Amthal said in a statement that she contacted the cabinet, expressing readiness to back up its efforts in the face of the current problems due to the rainy weather. She appealed to citizens to support the political leadership, cooperate with the competent authorities and neglect rumors. Solidarity of the Kuwaiti people under the current circumstances depict such a stance in hard conditions.
All disabled people totaling 594 at Sulaibikhat and South Sabahiya complexes are safe and unharmed amid the heavy rains hitting the country, head of emergency committee at the Public Authority of The Disabled (PAD) Amer Al-Enzi said on Friday. The emergency team are still fulfilling their duties towards the disabled and staff until the end of the current unstable weather, he added in a press statement Friday evening.

Industrial facilities safe
In the meantime, a senior industry official said yesterday that all state-owned industrial installations and utilities in Kuwait have not been affected by the current wave of heavy rains in the country. “All services and infrastructures of industrial zones have not been harmed. They are all operating normally,” Director-General of the Public Authority for Industry (PAI) Abdelakareem Taqi said. Drains at Al-Shuaiba Industrial Area are operating in a normally efficient mode, in spite of some cracks, he added. All industrial areas nationwide have been put on high alert and all senior officials on duty round-the-clock, the PAI chief pointed out. The authority is putting all potentials at the disposal of emergency teams who are doing their utmost to check and maintain all industrial zones, Taqi confirmed.

Flights unaffected
Air navigation via Kuwait International Airport was proceeding regularly yesterday despite the unstable weather. Official Spokesman of Kuwait’s Directorate General of Civil Aviation (DGCA) Saad Al-Otaibi said in a statement that the authority had begun implementing a contingency plan since Tuesday. The emergency state will remain in force until normal weather conditions are restored. Teams of technicians have been working round the clock to ensure normal work at the airport facilities.
Meteorologist Abdulaziz Al-Qarawi said the current rainy weather was expected to continue through today morning. Kuwait’s meteorological office had issued weather warnings yesterday for ‘an increasing potential for spotty and thundery showers.’ “The unstable weather gripping the country is likely to persist later (yesterday) with a chance of intermittent downpours at varying intensities, Qarawi said, adding that weather conditions were expected to gradually improve after midday today.
His Highness the Prime Minister Sheikh Jaber Al-Mubarak Al-Hamad Al-Sabah on Friday affirmed that the government was following up closely the situation across the country amid the current weather conditions. He vowed that officials who fail to fulfill duties well would be held accountable for any negligence. On the wake of this, Minister of Public Works and Minister of State for Municipal Affairs Hossam Al-Roumi submitted his resignation over damage of properties of both citizens and expatriates. – KUNA

Representative of Kuwait Amir to partake in Arab Summit 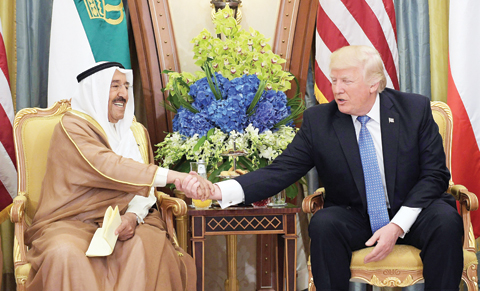 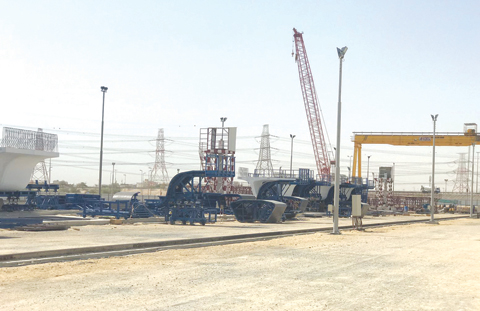