KUWAIT: The criminal court adjourned a nationality forgery case until next Tuesday for preparations and arguments. The defendant appeared in court and denied the charges. He said his picture in the nationality certificate looks different than what he looks now because he went through a gastric procedure, after which his features changed including his face, which made people think the passport is forged.

Murder threat
A woman told her husband to divorce his second, or she would hurt her. The husband told a Farwaniya governorate police station that he married another wife, but when his first wife discovered the matter a year and a half later, she demanded that he divorce the new wife, otherwise she would kill her. Police are investigating.

Fatal crash
The bodies of two citizens were sent to the coroner, and two of their friends were admitted to Adan Hospital’s ICU after their vehicle collided with a truck parked in the emergency lane on Mina Abdullah Road. The four where in a sports utility vehicle (SUV) when the driver was surprised by a truck parked in the emergency lane and rammed into it. The SUV was totally damaged. Mina Abdullah police and paramedics rushed to the accident scene and found two people were dead and two others were badly injured.

Car on fire
A police car burst into flames when it was on its way to deal with a traffic accident resulting in a death. The temperature of the patrol car rose, then it caught fire. Another patrol car was dispatched, while a fire engine was sent to put out the blaze.

Assault
Three citizens beat an Egyptian man behind a restaurant after he borrowed money from one of them and did not pay back. The Egyptian man went to Maidan Hawally police station and told them what happened, and that the beating caused injuries that were mentioned in a medical report. A complaint was lodged and the case was sent to detectives. – Translated from the Arabic press

US envoy meets quartet, no breakthrough in sight 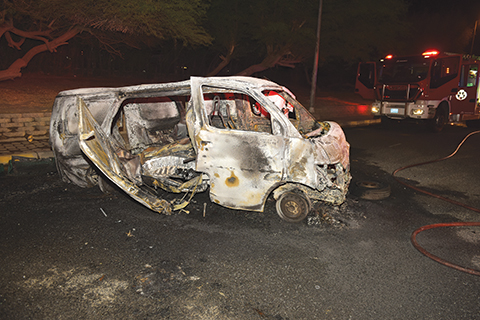 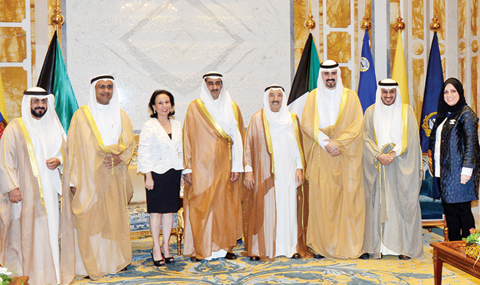