During his stay in Amman, His Highness the Prime Minister met with Jordan’s King Abdullah II and handed him a letter from His Highness the Amir Sheikh Sabah Al-Ahmad Al-Jaber Al-Sabah on ways of promoting bilateral ties and issues of mutual interest. Sheikh Jaber Al-Mubarak also held talks with his Jordanian counterpart in presence of his accompanying delegation, tackling a further development of Kuwaiti-Jordanian ties to serve common interests. Both sides also inked a total of 15 documents for bilateral cooperation in various domains as part of the joint committee’s meeting held in Amman between February 10-12.

Kuwait Foundation for Advancement of Sciences (KFAS) signed an agreement with the Jordanians, granting $6 million to the kingdom to fund construction and equipment of two schools for Syrian refugees. The two sides inked an amendment of a debt reschedule treaty, a cooperation MoU for cooperation in oil, gas, renewable energy and geology sectors. Moreover, they agreed on an executive program aimed at promoting tourism, training cadres and exchanging expertise. As to the one in the industries, it aims at activating a memo inked in 2012 for swap of expertise, technology transfer, studies and supporting national manufacturing.

Furthermore, they agreed on a media document for cooperation, exchanging news items, films and programs. In higher teaching, the Kuwaiti officials and their Jordanian counterparts inked an executive program for cooperation and scientific research. It is aimed at swapping studies and researches and facilitating contracts for Jordanian teachers in Kuwait. In meteorology, they inked a MoU designed to regulate cooperation and coordinate at regional and international conferences, in addition to exchanging information and experience with respect of weather forecast.

At the judicial level, they signed a memo stipulating expertise swap, particularly in civil and criminal cases, training judges and exchanging studies in disputes’ settlement. In housing and urban development, they agreed on exchanging expertise, consultations with respect of policies and legislations as well as training. They approved an executive program for protecting the environment (2019-2020), aimed at supporting executive programs in the two countries, executing projects and exchanging expertise in legislations.

In social affairs, they inked a memo for swapping expertise, information, studies and legislations in sectors such as productive families, small and medium enterprise and social legislations. Additionally, a memo was signed between King Abdullah II Center for Excellence and the Secretariat General of the Higher Council for Planning and Development, aimed at cementing cooperation at the level of developing civil servants’ capacities.

Trade volume
Also, Kuwait Chamber of Commerce and Industry signed a protocol with the Jordanian counterpart body for broadening cooperation and launching business partnerships. Kuwaiti Minister of Commerce and Industry as well as Minister of State for Services Affairs Khaled Al-Roudhan, who was present at the signing, said in his speech to the Kuwaiti-Jordanian economic gathering that trade exchange in 2017 reached $280 million and it was around $270 million until last November. The volume of Jordanian exports to Kuwait worth $228 million. Kuwaiti exports to Jordan reached $41 million, the minister revealed. He added that Kuwait investments in Jordan ranked first amongst Arab investors with $18 billion, while Kuwaitis were fourth when it came to number of real estate properties.

Minister Roudhan touched on the challenges facing the development of commercial exchange, indicating that it was important to come up with innovative plans and strategies to achieve more for Kuwaitis and Jordanians. The Kuwaiti official called on the private sectors in both countries to look into means to expand their mutual economic horizon, affirming that Kuwait had made vast improvements on its business atmosphere, which will hopefully attract more regional and international businesses. Law 116/2013 in Kuwait provides huge incentives for investors, he affirmed, calling on investors from Jordan to benefit from the current situation especially with the establishment of Kuwait Direct Investment Promotion Authority (KDIPA), which attracted $2.9 billion worth of capital. He noted that the Kuwait Vision 2035 was an ambitious plan that invites investors to take part in the country’s development and transforming into an international hub for commerce and trade.

Jordanian Minister of Industry and Trade and Supply Tareq Al-Hamouri said meanwhile that Kuwait and Jordan were eager to pursue ventures of economic and commercial cooperation. The Jordanian and Kuwaiti economic gathering had reflected a serious intention to look into venues of cooperation, said the Jordanian minister who called on both sides to take the opportunity to look into projects offered by both sides.
In the meantime, the Kuwait Public Authority for Industry (PAI) and Jordanian government signed an executive program for industrial cooperation and a memorandum of understanding (MoU) regarding industrial zones. PAI said in a statement the executive program would implement an MoU signed in 2012, and stipulated exchange of information, technical and administrative expertise, and transfer of technology and skills. The program, it added, would support national industries, and participation in workshops, seminars, conferences and training courses. It added the MoU would promote cooperation between the Jordanian Industrial Zones company and PAI. The MoU, to cover the period between 2019 and 2021, aimed at boosting cooperation in engineering, administration and marketing, as well as exploring means to attract investors.

Common challenges
His Highness Sheikh Jaber Al-Mubarak’s visit to Jordan is an opportunity to discuss the challenges facing the wider Arab region, said a Kuwaiti foreign ministry official yesterday. The visit comes amid ‘trying times,’ making the talks all the more significant, the Kuwaiti foreign ministry’s undersecretary Khaled Al-Jarallah said in a statement. He acknowledged the Hashemite Kingdom’s pivotal contributions on both global and regional scales, citing instability and terrorism as among the challenges the region has had to contend with.

The Kuwaiti official went on to say that a wide array of deals sealed between both nations is a ‘positive step’ towards stronger bilateral ties. Kuwait and Amman’s illustrious relationship has seen some 70 deals signed over the course of the last 58 years, according to the Gulf state’s ambassador to Jordan Aziz Al-Daihani. He said bilateral relations have reached exceptional levels thanks to the efforts of His Highness the Amir Sheikh Sabah Al-Ahmad Al-Jaber Al-Sabah and Jordan’s King Abdullah II. The Kuwaiti prime minister’s visit to Jordan yielded a plethora of deals over sectors running the gamut from the economy to energy and tourism.

Significant visit
Dr Fahad Al-Afasi, Minister of Justice and Minister of State for National Assembly Affairs, noted in a statement the importance of His Highness the Prime Minister’s visit, marked with signing new accords and activating old ones between the State of Kuwait and the Kingdom of Jordan. He has affirmed that a memorandum of understanding (MoU) for judicial and legal cooperation, inked by Kuwaiti and Jordanian officials, aims at exchanging experience, upgrading mechanisms of cooperation in the judicial realm, notably with respect of civil and criminal cases. It is also designed to swap researches, legal and judicial journals, information about legislation, achievements, organize training courses for judges, expertise in educational and teaching curriculums at judicial academies as well as studies for alternative means for resolving disputes. On his meeting with his Jordanian counterpart, Bassam Al-Talhouni, minister Al-Afasi said the talks with his host dealt with issues related to implementation of the inked MoU, pending completion of necessary constitutional measure’s. Meanwhile, Khaled Al-Roudhan reiterated the significance of the inked accords with Amman for enhancing Kuwait’s international status and boosting commercial exchanges between the two countries. – KUNA 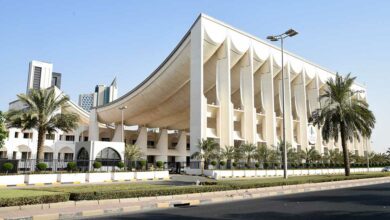 Nod to voting with civil IDs as constituencies expanded 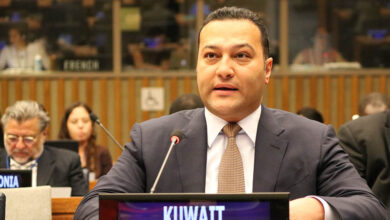 ‘Getting rid of nukes’ only way to guarantee non-use